The results of the first  Week of Accountability Challenge (WoA) are in! And the results are fascinating….

See if you can do what you plan for one week.

You can do it, Success!

Are you all set to study AbPsych at 8:00 AM at home today?

Please respond Yes or No.

I can feel it, Success – Sunday approaches.

Did you study AbPsych at 8:00 AM at home today?

Please respond Yes or No.

Your response for the evening gets posted on the Leaderboard, which looks like this:

The person with the most YES responses, won a $5 Amazon gift card. What happens throughout the week?

So participants started out with energy, feeling committed to doing what they planned and to participating, saying YES, but as the week progressed their energy waned…

Either they got distracted or their plans changed or they lost interest in responding, but whatever the reason, the commitment to their own challenge decreased over the week. Nizagara https://peteruncagedmd.com/nizagara/

Now, this isn’t very surprising, and it’s what many people complain about: “I start off motivated, but then I lose motivation.”

But what we learn from this WoA Challenge is that very few people were willing to actually say they didn’t do what they planned. Very few people said “NO.”

So, rather than checking in to say, “You know, I didn’t do what I planned,” as the week continues, most people avoid saying anything.

They Ghost their own commitments.

Ghosting describes when we stop communicating with someone, because for whatever reason we feel uncomfortable interacting with them.

It’s primarily done in relationships; and rather than say, “You know, it was nice meeting you, but I don’t think we’re a match,” many of us simply go silent, as if we never existed.

Yet, here we are, ghosting ourselves.

If your commitment were a girl you had been texting and now went silent on, she might be saying, “Um, you’re the one who asked for my number, you’re the one who said you liked me and even wanted a relationship (!) and now you’re not responding!? Dude, I wouldn’t even be talking to you if you hadn’t expressed interest…”

Rather than consciously saying “No, I’m not going to do that, I’m choosing something else,” which feels like failure, we simply avoid it.

With the WoA Challenge, the daily email would arrive, reminding each participant of their own plan, but they went silent. They ghosted themselves.

But ghosts hang around and accumulate…

Add up all our half-started commitments, conversations, books, programs, projects, and we end up being haunted by those ghosts, which now represent incompletion and failure.

As you might have guessed, this is no good for our motivation.

The Courage to Say “No”

For the few people who responded “No” in the WoA challenge, imagine the courage it took.

They’re saying, “I didn’t do the task I said I would.” They’re  admitting publicly, “Today, I was not the person I planned to be.”

It takes balls/ovaries to admit what feels like failure.

But is it actually a failure?

It’s the very first step toward acknowledging REALITY, and most important, to understanding yourself, so you can actually figure out what’s important to you.

As one girl wrote:

“I noticed the No’s were all responsibilities at home and nothing being school related. I guess school is more important than cleaning my room.  I decided to say no because if I lied, it wouldn’t have helped me. I didn’t have any motivation to do it so why lie.”

As described in my previous post, acknowledging “No, today, I didn’t do what I planned” is the first step towards seeing things as they are. A first and ultra-powerful step toward being accountable to yourself, and taking responsibility for your life.

TIPS AND TRICKS TO STAYING ACCOUNTABLE

1)  Find Success Wherever You Can

When you’re trying to do the better yet harder thing – study for a class, go to the gym, wake up early – you need to celebrate success wherever you find it.

For example, if you plan: Tuesday at 1 pm I will read AB Psych in the kitchen, and you find at around 1:05 pm you lounge around the kitchen sink and read AB Psych for 3 minutes – That Counts! That’s a big YES.

That little positive reinforcement will sow the seeds for you to do it again.

When you add a location to something you want to do, you are imagining it more fully, in reality, in life. You are doing a form of Mental Rehearsal. Mental rehearsal of an activity (aka imagining it) has similar neurological effects of actually doing the activity ! You are, therefore, making it much more likely to happen.

Imagine drinking a cup of coffee.

Now imagine holding a cup of coffee in your hand in your kitchen.
At 8 in the morning.
You’re wearing your pajamas, holding onto your cup with both hands.
You feel the heat of the coffee.
You smell it, fresh, rising from the cup.
You’re barefoot, and you feel the floor underneath you.
You hear the refrigerator humming.
Now, you finally take a sip.

Which version is more real, more vivid to you? Assuming you like coffee, which is more likely to happen?

In the WoA challenge, each participant only planned a start time. So if you showed up to “Read AB Psych” at 1 pm and literally stood there for 30 seconds, you would’ve won!

But we tend to think about things generally. Rather than give ourselves an end time, and one that we can easily win (i.e. Read AB Psych from 1 pm-1:05 pm), we imagine ourselves in a general way reading for 20 hours, masterfully maintaining the focus of a Buddhist monk, and when we don’t do that (because most of us are not Buddhist monks), we feel we failed, so we avoid it.

So choose an end time, and make it tiny!

Five minutes are better than nothing!

In the mid 80s, Nancy Reagan, President Ronald Reagan’s wife, headed the “Just Say No” campaign to reduce drug use among children. While that failed miserably, we can use it to win.

So, put on your Nancy Reagan mask, and if you didn’t do your AB Psych reading at 1 pm, Just Say “Nope, I didn’t do it!”

Saying NO, allows you to Own Your Time, and see with greater clarity what you are saying YES to.

I joined the Week of Accountability Challenge (WoA) because I needed a jolt of commitment energy and I hoped this might supply it. It did. I actually missed the second day but, when I received the reminder email that night, it got me back on track and I was successful after that. I learned, from others who participated, that they had equally good results.

I really liked the Leaderboard and the friendly competition it stimulated. All in all, I found this to be a very effective activity and I highly recommend it. Are you tired of making new year's resolutions that you never seem to stick to? In this post, we'll discuss why people fail at their resolutions and offer tips for setting realistic goals and creating a plan to help you stick to them. We'll also talk about the benefits of enlisting a buddy to support and motivate you, and we'll share some ideas for the kinds of resolutions that work best. With these strategies, you can make this year the year you finally achieve your new year's resolutions. No one actually LOVES making Plans…but it’s a necessity.

Planning Increases Follow Through When it comes to losing weight, going to the gym or studying, most people find making plans difficult, but according to research, plans increase follow through. Planning takes thought, and means Read more… 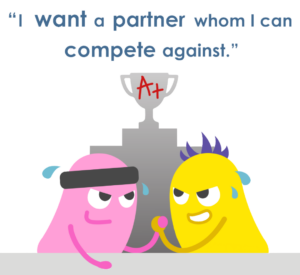 Check Out All Challenges